Refugee Claim Lawyers in Brampton, Toronto, the GTA, ON 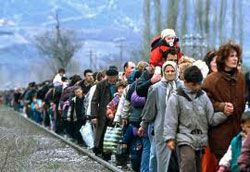 Canada offers refugee protection to individuals in Canada who fear persecution and would be in danger should they be forced to return to their home country. Some of the dangers a person may face include torture, a threat to their life, or unusual treatment or punishment.

There are specific and complex criteria under IRPA that a claimant must satisfy before being eligible to claim refugee protection in Canada. The CBSA or immigration officer who receives the refugee claim will decide whether or not it’s eligible for referral to the Immigration and Refugee Board of Canada. The board decides if the claimant is in need of protection.

Canada also has an agreement with the United States wherein a person who wants to make a refugee claim must do so in the first safe country he/she arrives in. This means if you enter Canada at a border crossing from the U.S., you may not be able to make a refugee claim in Canada – it must be made in the U.S. However, there are some exceptions to this rule, such as having family in Canada.

On December 15, 2012, Canada’s asylum system underwent significant changes. Under the current system, asylum claims from non-designated countries (countries where there are known human rights violations such as most of the third world countries and war-torn countries in Eastern Europe) will be heard faster through expedited hearings. This means those who need Canada’s protection will receive it faster, but claimants in designated safe countries (such as North America and most of Europe) will have to endure the slower refugee process. Another change is that claimants can appeal the denial of their refugee claims to the Refugee Appeal Division. However, they still have a further appeal to the Federal Court by way of judicial review if their appeal fails.

If you feel you could face one of these risks if you go back to your home country or the country where you normally live, you may be able to seek protection in Canada as a refugee. NLC will be able to help you determine the best course of action for you and your family concerning your refugee status.