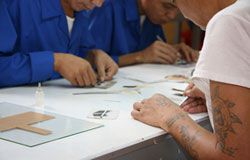 An officer of the Canada Border Services Agency is authorized to detain any individual suspected to have breached the Immigration and Refugee Protection Act, and the reason for detention may be based on the grounds that the individual concerned poses a risk/danger to the Canadian public, he/she is unlikely to appear for immigration proceedings, or the inability to establish the individual’s identity.

A Detention Review is then held by the Immigration Division of the Immigration and Refugee Board of Canada. A detention review may be held at one of the following intervals:

During the review process, the Immigration Division reviews the grounds for the detention to ensure the individual has not been detained without sufficient reason, and that the circumstance which initially led to the detention still exists. Based on the evidence provided, and the testimony of the detained individual and representations of counsel for the Canada Border Services Agency, the Immigration Division will either order the release of the person with conditions such as reporting to the CBSA and other conditions that the Division member may consider appropriate.

I have consistently secured the release of immigrants who have been detained through thorough preparation including consideration of any detention review transcripts, drafting detailed affidavits of the bonds person(s) and presenting compelling arguments for release.

Should you be detained and there is an upcoming detention review use the services of Raj Napal and NlC lawyers so you have the best chance of being released.